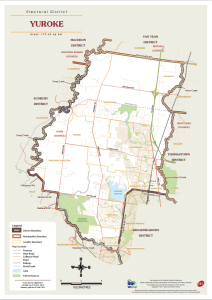 Yuroke was established as a state electorate in the 2001 review of electoral boundaries ahead of the 2002 election. Liz Beattie was the first member for Yuroke from 2002 until her retirement in 2014.

The Yuroke electorate is notable for its high proportions of young people, families, cultural diversity, and as an area where many families buy their first home. Over 60,000 electors currently reside in Yuroke – a number that is expected to continue to grow in the years ahead.

All of the suburbs in Yuroke are in the local government area (LGA) of Hume City Council, with suburbs in both the Aitken and Meadow Valley Wards.

Federally, the area is served by Maria Vamvakinou as the Member for Calwell.